8 Myths That Aren’t True About VPNs 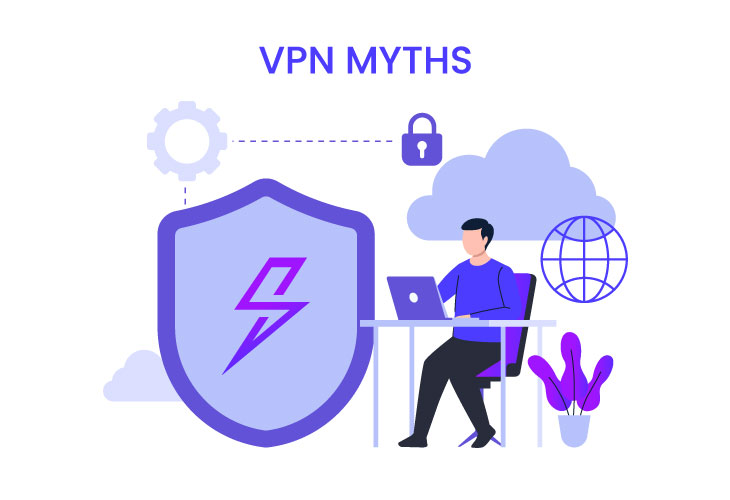 There’s always an elephant in the room when discussing VPNs. Are they safe? Are they legal? You may have seen a striking ad for a VPN that caught your attention, but right before you hit the “Download” button, you get cold feet. You may have heard some of these myths listed below, and here’s why they’re false.

1. A VPN will interfere with your internet.

Um no. That is completely false. A VPN is a virtual private network that supplies you with an encrypted tunnel to give you access to the internet. VPNs don’t provide you with the internet; that job is dedicated to your ISP (Internet service provider.)

The only way a VPN can interfere with the internet connection is if a Kill Switch feature was activated but only to keep your identity hidden and safe.

2. VPNs are too complicated to use and require a tech expert to install them.

More than a decade ago, this statement would’ve been true. VPNs were mainly used in a corporate setting to protect digital assets and required IT technicians to install them. Fast-forward many years into the future and VPNs have become much more consumer-based, user-friendly, and designed for everyday people who don’t have to worry about programming.

3. VPNs are only used by people who want to hide their illegal activities.

Just because you download a VPN doesn’t mean you’re up to no good. There’s a misconception that VPNs are only associated with illegal activities. However, they’re perfectly legal in many unrestricted countries as long as you’re not doing anything illegal online. Anyone can use it, especially journalists and activists who wish to protect their voices in authoritarian countries.

4. VPNs slow down your internet speed.

A VPN’s job is to encrypt your outbound and inbound data. While this process ensures that nobody will know who you are and what you're searching for, it won’t affect your internet speed in any significant way. Depending on which node you’re connected to, a VPN can even speed up your internet.

5. A VPN will alter your Netflix settings when you’re using a VPN.

A VPN only changes your IP address so that your location will be that of a different country. In the end, it will only affect everything you do online and not your internal settings. You can always revert to your original location to watch the content of your country. You won’t have to change the date and time of your device every time you switch on the VPN.

Wrong. Just because you’re someone who doesn’t step into dark corners of the web, doesn’t mean you’re away from prying eyes. Government entities and large corporations have access to you through your ISP and can know everything you do, say, visit, and download.

Corporations take your data and sell it to 3rd parties through data brokers. This is perfectly legal but oversteps their methods to get into your privacy. You may have nothing to hide, but without a VPN, you have a lot to fear.

7. Free VPNs are just as good as paid VPNs. Maybe even better.

The problem with free VPNs is that they require some sort of income to manage their operations and systems. And if they’re not getting it from paying customers, then how are they getting it? You may notice that you get targeted ads when using a free VPN. That’s because they monetize their services by selling your data to 3rd parties – which pretty much defeats the purpose of VPNs.

8. I don’t have to worry about viruses and malware after installing a VPN – it’s a no-brainer for safety.

VPNs can protect you to a certain extent but it doesn’t act like a force-field against hackers. While it’s promised that a VPN can provide safety and security, you are the real goalkeeper saving penalty shots from potential threats. Opening sketchy emails, downloading malicious files, and clicking on fishy links are still the number one way someone can get hacked and a VPN will not prevent that.