What is end-to-end encryption? 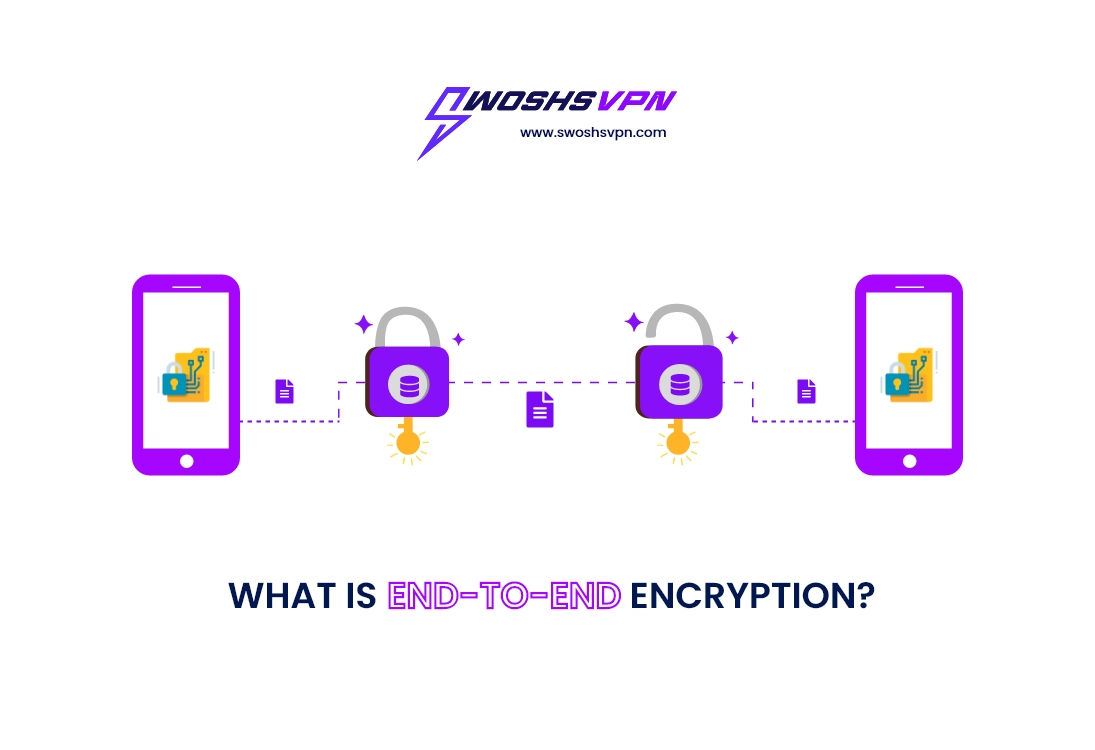 Protecting your online data is crucial to securing a stress-free internet experience. However, safeguarding our personal information has come a long way and has been put to practice hundreds of years ago in the form of message encrypting.

Encryption is the process of scrambling a message to a receiver so that anyone who intercepts it won’t know the content of the message. In simpler terms: it turns outbound data into a form that cannot be read or deciphered. Its implementation has been used to win wars, deliver sensitive information, espionage, and protect people’s sensitive information. Before its integration with technology, encryption was first executed by the ancient Romans.

A brief history of encryption

It’s a warm evening in ancient Rome circa 60 BC. The markets are flooded with pedestrians commuting through the stone cobbled roads with different odors springing from everywhere. Julius Caesar is working on a device that he believes will be revolutionary for his ever-growing empire and to protect his life. He crafts an encryption mechanism to hide messages that are constantly being transferred. This invention was very ahead of its time but proved to be effective among the high elites and ranking officials.

He invented a mechanism that shifts the characters in three places

(As illustrated in the image)

It works by substituting a given letter fixed to a number on a message. A would become D depending on the position. B becomes E etc…

Fast forward to the year 1553. Giovan Battista Bellaso devised what would be the first cipher to utilize a proper encryption key. Unlike the Caesar cipher, the message didn’t require a mechanism to decrypt it but instead a keyword. The only way for the recipient to decode the received message was to know the keyword.

For the centuries to come, encryption was used to hide plain texts and deliver world-changing messages during historical events like World War 2. In the early 1970s, IBM designed a block cipher to safeguard their users’ data and in 1973, the US adopted the Dara Encryption Standard (DES) as a national standard. It proved to be reliable and sturdy until 1997 when the DES was cracked and a new encryption standard had to be implemented.

The beginning of the millennium saw the Y2K mass scare which limited trust in technology. But the world still needed a robust encryption standard. The Advanced Encryption Standard (AES) dethroned DES since it uses an asymmetric key, which means that to crack it, both the user and the sender must have the same secret key. It's even employed by government agencies, including the United States military.

The National Institute of Standards and Technology (NIST) began the inception of AES around 1997 as a way to replace the feeble DES which has since then become a target of cyber-attacks.

The AES was invented and developed by the US government, and it is now freely available in the private and public sectors, as well as noncommercial and commercial programs that provide encryption services, such as VPNs and cyber security firms.

The AES has an advanced encryption algorithm with three block ciphers that can be applied and hardware and software to protect vulnerable information. A block cipher is an encryption method that separates the original plain text into consistent blocks.

How does AES encryption work?

The block cipher numbering is as followed:

The 128-bit key has 10 rounds of processing which includes substituting, transposing, and mixing plain text to transform it into the final output of ciphertext. While this is strong, the 192-bit key uses 12 rounds and 14 rounds for 256-bit keys making it far superior. Each cipher encrypts and decrypts data in the blocks according to the number of bits it contains respectively.

As mentioned, encryption is the process of ciphering messages from plain texts. The recipient has the key to unlock the message but the host can see the plain text. End-to-end encryption works by encrypting a message so that only the sender and recipient can view it in plain text. Even the servers that are hosting the services can’t read the messages.

Think of it as writing a physical message and placing it in a chamber that is immune to any external destruction including the company that built the chamber. As the chamber travels from the sender, nothing can crack it or open it. When it reaches the recipient, that person will have a key to open the chamber and read the content of the message. And the recipient will, in turn, respond with a message and place it inside the chamber and send it back. No one can know what the message is or even to whom it’s sent. End-to-end encryption will guarantee communication privacy.

Messaging apps like WhatsApp and Telegram utilize end-to-end encryption to protect their user’s data so that no one (not even the developers) can read the plain messages.

A VPN (virtual private network) works by creating a protective pathway between your device and the internet by utilizing an end-to-end encryption security system to hide your online requests. As a result, your ISP (internet service provider) cannot see what websites you’re accessing and the contents contained within.

SwoshsVPN’s dogma is to protect any user’s online privacy. It utilizes the highest level of encryption (AES 256 bit-key length) to secure your privacy and anonymity. You can choose any country node of your choice and change your IP address accordingly. It offers an array of secure IP addresses for impressive downloading speeds and a no-log policy.